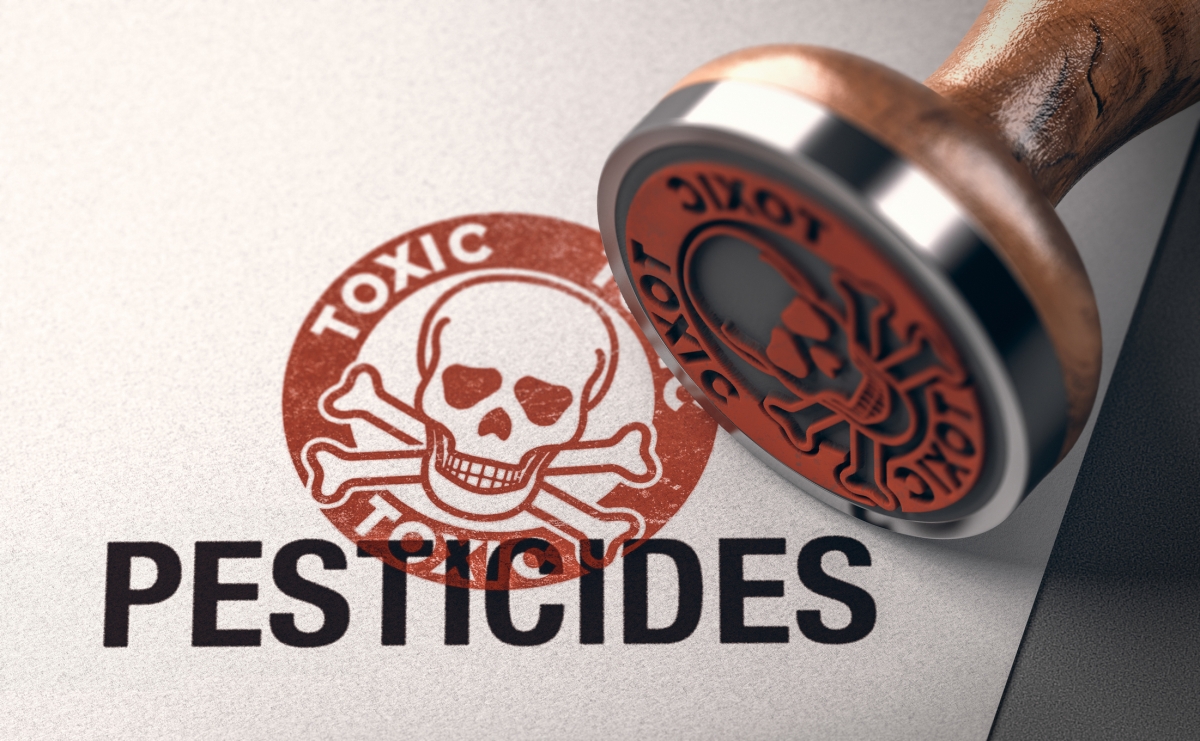 Pesticides are silent, invisible and ruthless killers. They are chemicals that can have a long lasting and tragic effect on one’s life as well as creating irreversible consequences to our precious environment.

These chemicals are sold in large amounts at huge profit by the callous agrochemical industry, without extensive, thorough, transparent and independent investigations.

Why is it that pesticides, which are a class of chemicals, do not have to go through a testing regime similar to the clinical trials that pharmaceutical drugs are put through?

Recently, the EPA (US Environmental Protection Agency) announced they will end the use of chlorpyrifos, a broad-spectrum chlorinated organophosphate, as it’s associated with neurodevelopmental problems and impaired brain function in children. Some countries continue to use this toxic chemical, including Brazil.

Brazil has been the country with the highest consumption of pesticides since 2008. In 2020 alone, the agrochemical industry’s turnover was over US$ 12.1 billion. The area treated with pesticides increased 6.9% in 2020, compared to the previous year, to an area of 1.6 billion hectares. A staggering 1.05 million tons of pesticides were applied in the country in 2020.

Fossil fuels and green house gases are great contributors to climate change, but Highly Hazardous Pesticides (HHP’s), which affect the health of large parts of the population and our environment, have gone largely unrecognised.

Agrochemical organisations across the world, along with the agribusiness industry are making substantial profits at the expense of people’s lives and health, as well as contributing to damage to wildlife, water contamination, environmental degradation and biodiversity loss.

The Pesticides Law in Brazil established in 1989, was defined as:

“The products and agents of physical, chemical or biological processes, intended for use in the sectors of production, storage, and processing of agricultural products, in pastures, in the protection of forests, native or implanted, and of other ecosystems as well as urban environments, hydrological and industrial, whose purpose is to change the composition of flora or fauna, to preserve them from the harmful action of living beings considered deleterious; and substances and products, used as defoliants, desiccants, stimulators and growth inhibitors”.

Brazil’s president, Jair Bolsonaro, has recently incorporated a Presidential Decree 10.833/2021, amending the 1989 pesticides law, by making the approval process of pesticides even more flexible, including the approval of chemicals that have already been banned in the US and Europe.

With the new amendment, chemicals that cause cancer, genetic mutations and fetal malformation, will be given approval to be used as well as manufactured, if a “safe exposure limit” is determined.

Additionally, the current Brazilian legislation does not provide for a minimum period for the renewal of pesticides licensing. Pesticides that have been in the Brazilian market for more than 4 decades are still being used today, without ever undergoing an assessment of environmental and health issues.

It’s a fact that the approval process of pesticides has never been made easier, as more power has been given to the Ministry of Agriculture on the decision making process, leaving ANVISA (National Health Surveillance Agency) and IBAMA (Brazilian Institute of Environment and Renewable Natural Resources) excluded from the final decision.

There are currently a whopping 3,477 pesticides on the Brazilian market, 40% of all chemicals were approved in the last 3 years, all under Bolsonaro’s government. In 2020 alone, 494 products were authorised, totaling 997 new products in just two years.

According to a recent joint report by IPEN (International Pollutants Elimination Network) and ABRASCO (Brazilian Association of Collective Health), 53% of pesticides licensed in Brazil between 2019 and 2020 were manufactured in China, 22.1% in Brazil, 9.4% in India, 4.5% in the United States and 3% in Israel.

Another worrying issue is the number of illegal pesticides smuggled in from China. According to a study carried out by FIESP (The Federation of Industries of the State of São Paulo), at least 25% of the pesticides in Brazil are illegal, smuggled through Paraguay with Chinese origin.

In January 2021, the Department of Border Operations (DOF/PM) apprehended 3.5 tons of smuggled pesticides in Maracaju, MS. The cargo was valued at approximately USD 1.2 million, according to Campo Grande News.

“The smuggling of pesticides is growing in the country at the rate that Brazilian agriculture grows… This smuggling has become a major concern as it is no longer a small market, but a large economy controlled by specialized gangs,” director of Brazil’s Institute for the Economic and Social Development of Borders (Instituto de Desenvolvimento Econômico e Social de Fronteiras – IDESF) Luciano Stremel Barros, told the Brazilian Senate in September 2019.

Highly toxic chemicals that have already been banned in many countries, including in the European Union, are still being used in Brazil. Many of these products are used as a suicide and violence tool.

Aldicarb, a carbamate insecticide and an illegal rat poison, popularly known as “chumbinho”, is one of the chemicals used not only for suicides, but also for the practice of aggression.

My auntie, a farmer, committed suicide by swallowing “chumbinho” a few years ago. By the time she was found and showing regret about her decision, it was already too late, as she met a horrible and painful death. This is not an isolated case in Brazil, and it affects the most vulnerable.

In May this year, 60 rural workers were rushed to hospital with symptoms of pesticide poisoning in the metropolitan are of Goiânia, after a plane sprayed pesticides over the fields where they worked. Most reported headaches, vomiting, dizziness and some passed out.

In 2018, 475 pesticide poisonings were reported in the State of Goiás alone. In 2019, the number rose to 516. 18% of all poisoning were caused by glyphosate. It was also reported 99 attempts of suicide with pesticides.

The number of accidents and poisonings is far worse than reported. Workers are usually reluctant to report their cases to companies or to the Brazilian Social Security Institute (INSS). Many are afraid to denounce the companies or seek justice, as it risks their employment credentials in the future. Others take the word of campaigns aimed at convincing workers that pesticides are not dangerous and that their symptoms are instead caused by stress and tiredness.

For workers without a formal contract, the situation is even worse. “When intoxication occurs, the company sends the employee home with no rights or anything. The INSS cannot make the payment of sickness benefits because there is no proof of employment,” explained Gabriel Bezerra, president of the National Confederation of Human Responsible and Rural Employees.

According to the World Health Organisation and the FAO, HHP’s are described as “pesticides that are acknowledged to present particularly high levels of acute or chronic hazards to health or the environment according to internationally accepted classification systems”.

The forms of exposure to pesticides can vary, through inhalation, dermal or oral contact, via spraying, contaminated food and water and also via a worker’s clothing. The main health effects are acute, when they appear fast, or chronic, when they appear after repeated exposure to small amounts over a long period.

Additionally, the intensive use of pesticides influences the immunological system and industrialised food production promotes obesity and the vulnerability to COVID-19.

Glyphosate is no doubt one of the most popular pesticides in Brazil, representing 62% of the total herbicides used in the country. Glyphosate is the key ingredient in the Roundup herbicide and was first patented by Monsanto in 1974. Bayer acquired Monsanto for USD 63 billion in 2018.

According to a survey by Princeton, Fundação Getulio Vargas (FGV) and Insper (Insper Learning Institute), the spread of glyphosate in soybean crops led to a 5% increase in the infant mortality in South and Midwest Brazil that receive water from soy growing regions. This represents a total of 503 additional child deaths every year associated with the use of glyphosate in soybean farming.

“It is absolutely clear that glyphosate can cause cancers in experimental animals”, affirmed former Director of the US Agency for Toxic Substances and Disease Registry, Chris Portier, who worked on the IARC, International Agency for Research on Cancer review of glyphosate. “And the human evidence for an association between glyphosate and cancer is also there, predominantly for non-Hodgkin’s lymphoma”.

In the US, Bayer has been fighting billion of dollars in settlements to end lawsuits over accusations that glyphosate causes cancer.

Mexico has made the decision to ban glyphosate, which will take effect in 2024.

The list of active ingredients consumed in Brazil with the authorisation of ANVISA is alarmingly extensive, including acefate, chlorpyrifos, atrazine, 2,4-D (2,4-dichlorophenoxyacetic acid), diazinon, metomyl, amongst many others.

Chlorpyrifos (CPF) is also a broad-spectrum chlorinated organophosphate (OP) used in crops, vegetables, fruits, as well as households. Exposure to this chemical during pregnancy or childhood has been linked with lower birth weight and neurological changes, such as cognitive and behavioural performance.

The toxicity of CPF has also been associated with neurological disfunctions, endocrine disruption, cardiovascular diseases. It can also induce developmental and behavioural anomalies, genotoxicity, oxidative stress and hematological malignancies, as evidence by animal modeling.

CPF has been banned for use in the EU.

A group of scientists, including Tyrone Hayes found that 10% of male frogs reared in atrazine water turned into females.

2,4-dichlorophenoxyacetic acid is a widely used agricultural weed-killer and endocrine disruptor shown to have links to cancer, including non-Hodgkin’s lymphoma. It was first marketed in 1945 and one of the main ingredients in the Agent Orange, used to destroy forests during the Vietnam war.

Acefate is an organophosphate (OP) insecticide used on food crops, as well as a seed treatment. People can be exposed by breathing or on their skin. Acefate has been associated with TGCT, testicular germ cell cancer, particularly strong amongst Latinos, according to a study by the American Association for Cancer Research (AACR).

Brazilians are not the only ones being poisoned by toxic chemicals, in fact, you and your family could be consuming these toxic substances unknowingly, via products being imported into your country.

It has been reported that Germans are already consuming products containing pesticides that have already been banned in the European Union.

At the request of Greenpeace, tests were carried out at 70 Brazilian fruits sold in German cities by an independent German laboratory. 11 substances that have already been banned in the EU have been detected, totaling 35 different pesticides found in mangos, lemons, papaya and figs, 21 of those were considered Highly Hazardous Pesticides (HHP’s).

In order to stop the world being poisoned by chemicals that affect our health and our environment, a tougher international regulatory system needs to be implemented, including proper thorough, independent and transparent assessments of such toxic substances.

It’s time for the greedy agrochemical industry and our governments to put our health and the health of our planet above their rapacious profit, once and for all!